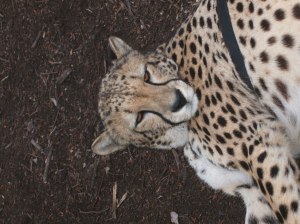 I love cats. My last trip (Nov 2010) to South Africa included a 4 night stay along the Garden Route – 1 night in Storms River and 3 in Plettenberg Bay, a thoroughly beautiful section of the Garden Route.  When I discovered a wildcat sanctuary close to Plettenberg Bay, Tenikwa, I knew I had to visit and booked a Sunrise Walk with Cheetahs for myself and my friend.  I was really looking forward to this activity as one of the highlights of an overall 16 day trip to South Africa.

We arrived early on a beautiful sunny morning and after a cup of tea were led out to walk the cheetahs.  There were two guides, two cheetahs and a group of about 7 tourists in all.

The male cheetah, Chester, appeared a bit agitated from the outset and took a paw swipe at one of the guides early on, but this was laughed off by them with a gentle chastise.

The female cheetah was much more placid and we enjoyed walking her (on a lead) and when she lay down for a rest (which surprisingly was very often!) she was very happy for us to pet her and purred loudly.  I did not attempt to pet Chester!

The first mishap we had was when the female brushed against an electric fence and took off like a bolt of lightening which was a bit unsettling.  The second was much more frightening..

One of the guides had stopped to give Chester a drink of water.

This photograph of Chester was to be the last.  After that, the lovely walk took a turn for the worst when Chester decided to attack one of the other tourists who (perhaps unwisely) was wearing a red t-shirt and who was filming via camcorder.

Chester broke free from the guide and dragged the very frightened tourist to the ground who, by the time it was over, had lost his shoes and most of his trousers and gained some nasty scratches.  During the attack the male guide tried to haul Chester off the hapless tourist, however the cheetah managed to pull free from his harness.  After a few minutes, he left the poor tourist alone and we stood there in a frightened group looking in horror at the loose cheetah who was clearly very angry.  The guides here do not possess weapons of any kind, however they were able to radio back to reception for assistance.  The initial assistance arrived in the form of a third guide, again unarmed ,who could offer no real help in terms of catching the cheetah or removing us from the area.

Finally, one of the owners arrived, the female partner in the husband and wife team who appear to own the sanctuary.  In what can only be described as a “Born Free” esque moment, she calmed the cheetah by talking softly to him and petting him before he finally allowed her to put the harness back on him.  She stayed with him whilst the other guards led us back to the safety of reception.

The injured tourist was very shocked and once his cuts had been tended to and  new clothing provided, he was driven to Plettenberg Bay for a check up,  a tetanus jab and what turned out to be 8 stitches.

What surprised and disappointed me the most was the attitude of the owners to the attack.  They arrived back to reception and proceeded to attempt to find out the reason for the attack – but were determined that the reason was something we had done to antagonise him.  The injured tourist and his friends, although annoyed that they were being accused of “having eyes that were too piercing and staring at Chester”, in my view, did not sufficiently object to the manner in which they were being blamed for the incident.  Clearly the owners wanted to protect their business and the Cheetah Walk is their major offering, but from a safety perspective I would have expected Chester to be removed from meeting and walking with the public at a minimum.

That aside, we managed to put the fright behind us when we moved on to the next part of our activity – which included meeting more cheetahs and entering their compound.  They were lovely and even though we had been really frightened by Chester, we did not feel at all at risk with these other cheetahs.  See below! 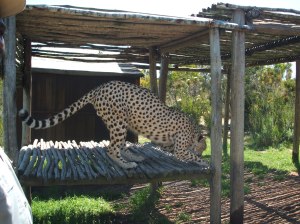 Would I recommend visitors to South Africa to do the cheetah walk at Tenikwa?  In all seriousness, I couldn’t after what happened to us.  But I did enjoy the Wild Cat experience which followed, and which included meeting (but not walking) different cheetahs who seemed much more at ease with us tourists!

Promote Your Page Too